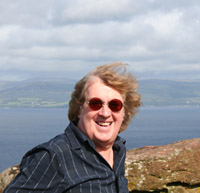 Like many "baby-boomers" I was captivated by the plastic construction kits of the early 1960’s. I started with large kits by Airfix, Renwall, Aurora, Revell, Frog, etc., etc.. When I discovered the Eaglewall waterline kits, I was hooked - and not just because of financial & space restrictions!

I rediscovered my boyhood collection, (in an old shirt box!), when I was an art student, and renovating these small models seemed like a good foil to painting on big canvases! By the time I started teaching, I had graduated from repairing the models to converting and scratch-building. I started to get requests for ship models from collectors and wargamers, who had seen my work, and I started looking for ways to mould and produce models from my masters. From early crude resin castings, I was able to sub-contract production casting to a model figure manufacturer, until I was able to purchase my own casting machinery in the mid 1980’s.

Clydeside models were first produced in 1978, as simple, one-piece, wargame models and the range rapidly expanded to over 200 models, including WWI, WWII & modern warships, and 37 Clyde steamers. The early models were cheap and cheerful to produce, but the many undercuts resulted in short mould life and lots of (constant) extra work remaking new production moulds. This slowed down production of new models and hindered the process of advancing the quality of the models. It was decided to stop production of all the original models and reinvent the range in the form of more detailed, multi-piece kits, allowing scope for super-detailing and customising to any particular ship in a class, as, rarely were two sisters identical. At the same time, the models would continue to be robust enough for the rigours of war gaming.

Future additions will therefore be new multi-piece kits, made from new masters, replacing the one-piece castings, plus models of ships that were never in the old ranges. As before, many of the new models will be as a result of customer "requests".